Who's seen the new Borat movie?

I thought it was brilliant.

It was amusing to read the 1 star reviews on Amazon. So many Trump snowflakes trying to push the rating down.

I saw it. The woman who played Borat's daughter was exceptional, and I hear Cohen thinks she should be up for an Academy Award.

Got a 68 on Metacritc, which is good.

"Having been made with a specific political purpose, Subsequent MovieFilm won’t age as well as the previous Borat did. Whereas that one will stand as an evergreen comedy, this one might be as ephemeral as a newspaper’s editorial cartoon or an episode of Spitting Image. But it’s the ripped-from-the-headlines relevance that makes it so fascinating, and it’s the boiling rage at current politics that makes it so bracing. There aren’t many films as urgently satirical as this one. You might not want to re-watch it in a few years’ time, but you should definitely watch it now." 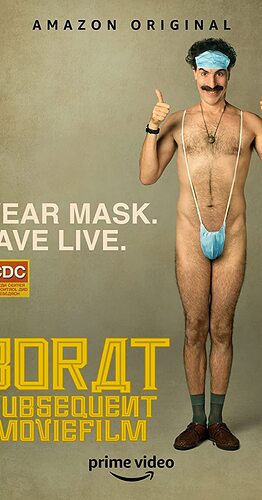 Once prosecutors are able to access Trump's tax records and put Trump in jail, a new Borat movie should be played 24/7 in his cell as a special payback for being the worst, the most divisive, and destructive guy in the WH!