I'm in for letting the air out of tires. What's not to like? Are these new tires noisier, quieter, or about the same as conventional tires?

"Though most major tire manufacturers have been working on airless technology, their efforts have gone slowly, at least until now. The challenge has been to come up with a design that can match the behavior of conventional tires in terms of performance, handling, energy efficiency and cost."

"Michelin, which has done extensive virtual testing of the Uptis, has recently begun to run it on real vehicles." Definitely must be tested on real roads with real pavements. 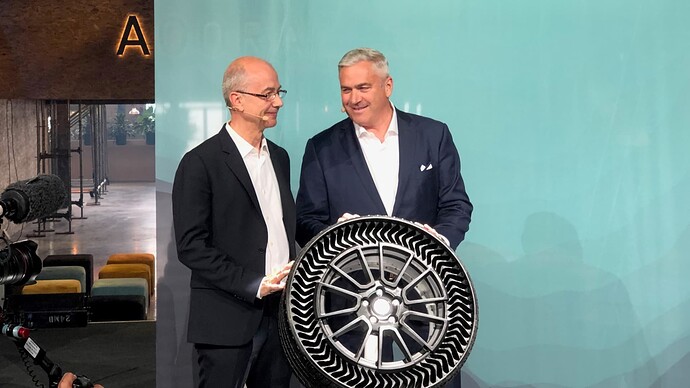 From wheel to tweel: GM partners with Michelin on airless tire

GM and Michelin form a new partnership on a prototype of a radical new type of wheel designed to replace the conventional pneumatic tires. Myth busters did a airless tire made out of wood

Myth busters did a airless tire made out of wood

Airless wooden wheels or tires, if you will, have been around and used successfully for ages. So I'm not sure what myth they busted.