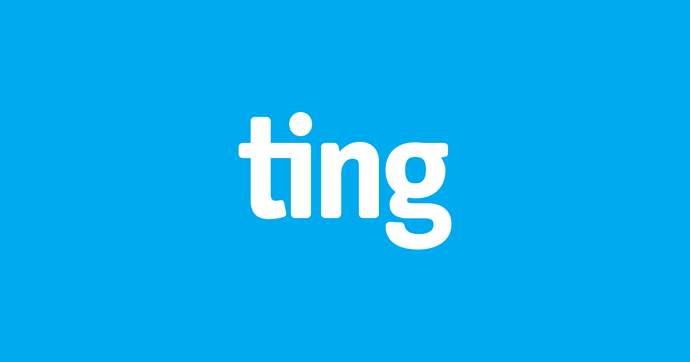 Crazy fast, reliable, gigabit fiber Internet for your home or business. Check your address to see if we’re serving your neighborhood yet.

It does not appear to be Google Fiber.
(Cities listed in this article.)

Google Fiber is part of the Access division of Alphabet Inc. It provides fiber-to-the-premises service in the United States, providing broadband Internet and IPTV to a small and slowly increasing number of locations. In mid-2016, Google Fiber had 68,715 television subscribers and was estimated to have about 453,000 broadband customers. The service was first introduced to the Kansas City metropolitan area, including twenty Kansas City area suburbs within the first three years. Initially propos...

Another Ting promo as I check out form buying my Sprint SIM. So $25 for activating then another $50 to bring in one referral, nice!

It's not Google Fiber. We've offered fiber internet for a while now: https://motherboard.vice.com/en_us/article/z4mqj8/a-domain-name-company-is-starting-a-mini-google-fiber-to-compete-with-comcast

It's symmetrical gigabit (1000 down, 1000 up) and right now is only live in 5 cities, but we're in the middle of launching #6 (Fuquay-Varina, North Carolina) and hope to announce future cities in 2019. Still a lot of paperwork to do, though.

We believe in doing it the right way (which sometimes means slower, more methodical rollouts), fiber to the home, rather than just to the property or to the neighborhood. You can vote for your city to become the next Ting town here. -- More votes means a city is higher on the list when we look to expand.

It's an uphill battle. Even the towns we're currently in require existing telcos to move their lines off of utility poles (with no incentive to move quickly) or dig up parkways.

I've got one of our internet guys here with me if you guys have any questions that I can't answer. I mostly do mobile support.

Wow-- ambitious project, indeed.
As a resident of one of the original Google Fiber cities, I've read a lot about the hurdles involved, and particularly what made our city, and our metro area, a viable option for a Google Fiber rollout. (And a lot of it had nothing to do with consumer demand, but with the roadblocks that make such a project nearly impossible in many locales.)

I'm jealous. Fiber isn't available where i live, but it's available about 3 miles north through AT&T. Not symmetrical, but fiber nonetheless. I'd gladly pay them, but I understand that the incumbent in my area (Comcast) doesn't need to make it easy. The way the city is structured, a new utility requires utility poles to be cleared.

The demand is definitely there, but said hurdles make it nigh impossible to build from the ground up. That's why we've focused really hard on buying existing infrastructure for turnkey operation (BRI Works) or where the city actually owns the infrastructure (Westminster) and we take care of the hard stuff.

We tried at this time last year to bring Fiber internet to Burlington, Vermont. We lost to a company that said several times it was probably going to sell it in a few years. It was bloody: https://vtdigger.org/2017/11/28/councilors-ok-schurz-communications-purchase-burlington-telecom/