The Doctor is at the Door

I have been reading about the growth of telemedicine which appears to be a thriving field.

The idea seems very appealing as it allows one to use technology to avoid going to a doctor's office or urgent care facility for minor issues. It is certainly cheaper than doing the latter. Teladoc (TDOC) is a big player in this space and while its stock is not for the faint of heart it has bounced back nicely in the last year.

Now there is another option Heal which allows one to have a doctor come to your home.

The pricing is as follows: 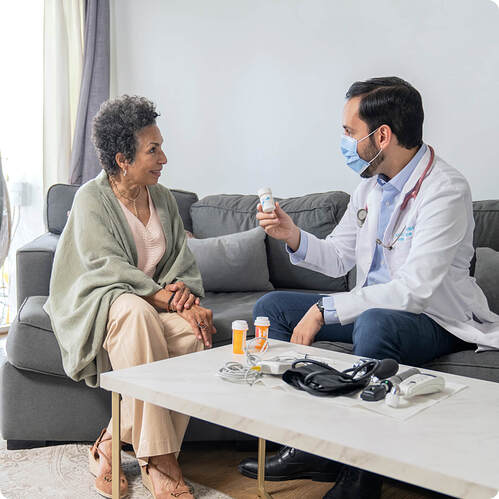 Heal - Talk to a doctor on-demand and on your schedule

Talk to a doctor on-demand and on your schedule, 8am-8pm, every day.

Today's Washington Post has an article on actual experience with the system and there are some interesting comments posted by doctors.

The idea of having a doctor show up is probably unfamiliar to most Americans (median age 37) but it certainly is not unknown to many people who have experienced it in earlier times.

Is this something that can work?

Just thinking about it, I do not see it as viable. At an average of 14 calls a day, a doctor is going to be grossing, before expenses, less than a plumbing tech is expected to generate in most major urban areas. Barriers to entry as a licensed physician are very high.

In addition, I would imagine that most of the medical issues that can be addressed during such a visit could easily be handled by a NP. Restrictions that the AMA has had enacted into law in most places do of course seriously hamper the "scope of practice" for NPs.

Can this really take off?

I think it could be viable for a certain species of doctors,i.e., doctors who don't want to be ensconced in the normal or traditional healthcare business model, with all of the malpractice insurance, office overhead, and insurance company nightmares that entails.

Let's say a doctor can make $80 per house call x 10 calls per day = $800 x 220 day s a year = $176,000, while keeping in mind the assumption that "Heal" would pay for whatever malpractice insurance is required, as well the fact that the car expenses and other expenses is probably tax deductible, which would likely keep that $176,000 intact. Further, given that most of these doctors would probably be general practitioners, a hassle free $176,000 ain't too shabby. Of course there are many ifs as to how this business actually works, but someone thinks they can make a profit from it. Also, I know there are a few crazed doctors out there who make house calls and only request that their patients pay whatever they can, if they can. These few " good samaritan" doctors set the bar pretty high, but I suspect that there are many other doctors out there whose sole concern in not money. Then again, there are many quacko, lazy, and drug addicted doctors out there that "Heal" must vett out.