The Beetle is No More

Auf Wiedersehen to one of the most iconic cars of all time, one of the ugliest and most lovable cars ever made. 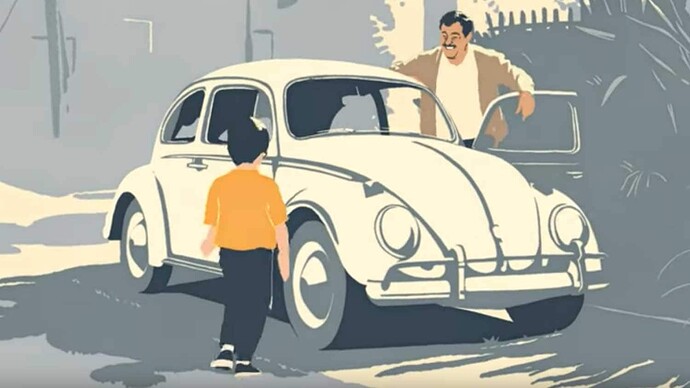 Grab some tissues, this one's sad: VW asks fans to say g(o\!/o)dbye to its iconic Beetle and welcome in the company's new electric-powered future in ad. Who knew VW made a self driving/flying Beetle. If only they could have come out with it sooner....

I'd love the chance to drive an early-generation Beetle again, and see how it compares to my memories of it. (And I do remember many of it's flaws & quirks, all of which I was inclined to overlook when it was weighed against the joy of having a vehicle at my disposal.)

A client at work sometimes arrives in a pre-1968 model, which has been in his family since new, and is kept dead stock. Another client (40-something) sometimes arrives in a similar vintage, but tricked out with many off-the-shelf modifications. A 3rd, who has not visited in the last few years, would pick up equipment in a VW Thing, which was most definitely treated as a Utility Vehicle rather than a show car.

All 3 cars will cause my co-workers to put down their projects, and go gawk & talk with the owners, which I imagine is one of the joys of owning a vintage vehicle.

If one drove a Beetle today after many years driving modern vehicles, one would realize how clap-trappy they were and are. But in its heyday, they were hard to beat for economical and reliable transportation, not to mention the beautiful thrashing sound they made. My first Beetle was a 1954/55 model that I bought in Germany and drove around there for a few years. I also bought a new 1970 Beetle in the USA, and it seemed so modern compared to the 1954 model. Also owned a 1966 Bug and a 1962 VW Bus. 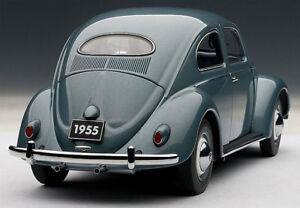 My first Beetle was a '68 that I built out of 3 Beetles, in my backyard. I bought the '68 for $50 from someone and removed the body. After putting new pans in the bottom I put a '70 body on it and doors from a '69. I then rebuilt the engine before installing it.

It was a great car until some kid parked his Buick in the engine compartment at a traffic light.

Years later my daily driver, for most of a decade, was a red '57 Porsche 356A T2 Coupe. Another really fun car.

Then came the '77 911S Targa that I transplanted a very upgraded 3 liter engine into, from an '83 SC. I remember when I was testing out at a track, near Savannah, the instructor saying, "Holy cow. This thing is WAY faster than it's supposed to be."

After so many years of working on them there isn't much that I don't know about an air cooled engine, anymore. 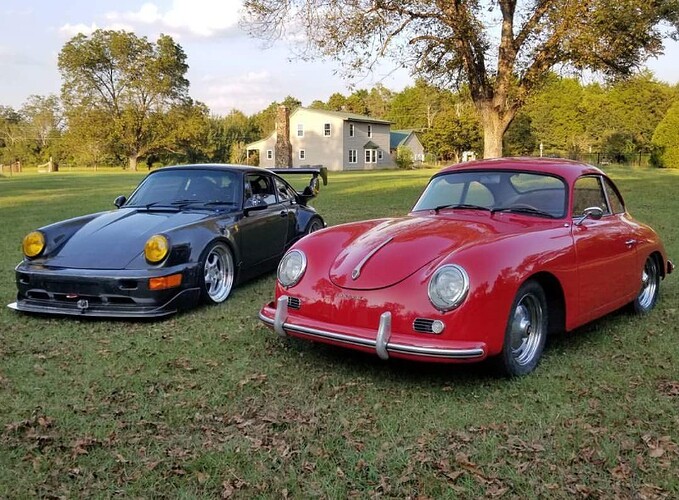 Re Engine rebuilding. That's another nice thing about the early Beetles, one could get the engines in and out quickly. The below video shows how easy it was, though the video has been sped up just a tad, so things look easier than they are and it will take one longer than 6 minutes to do the task. That Porsche 356A coupe is gorgeous, and the hardtop makes it's beetle relationship much more obvious than the convertibles I usually see.

My favorite Beetle quirks:
Don't forget to pop open a rear vent window if you're going to be on the highway on a hot day, or you'll beat your eardrums to death when you lower a window for a breeze.

Watch those 100 mm cigarettes, because you'll knock off the coal on the windshield if you try to turn the steering wheel.

If you have the heater on, and drive through a puddle, the sudden foggy interior lets you know you need to tend the hoses in the engine compartment.

The space under the rear seat is a great place to store items you'd just as soon remain hidden. As a bonus, cheap wine seems to improve in quality after being heated repeatedly by the proximity to the engine.

Only in my dreams. I think it was an 8 window.

From ~1975, and onward for about a decade my life had lots of VWs & beetles in it as my 1st full time 'adult' employment was at a VW dealership doing mostly oil & tire changes.

My off times were spent with my HS (and later college...) buddies making sure each of us had a usable vehicle - all VWs, of course.

Together we rented 3 stalls of a 4 stall garage & at any single time had at least 1 parts car as the donor for our combined efforts.

When it came my time to get done with the VWs it was with some reluctance - and it was simply forced upon me by the lack of any affordable beetles at that time and the utter necessity of having a car.

I will not say what car(s) came next - but I will say these things:

By comparison to what I've been driving ever since the VW days - quite frankly I would only consider using a Beetle as yard art now if I had one and a yard to put it in - else - no thanks.

The only other comparison I can make is with a friend's 2005 Toyota Matrix...
That car was the true definition of a lemon, right down to having brakes that failed to stop it from the very day that it was bought, and many other problems besides.

So, I give the VWs this strongly important credit:
At least it was easy enough to make 100% sure that they had good brakes & would always stop as & when it was needed !!

Aside of that:
I don't miss 'em even a tiny little bit, they were great for us when we were kids, and we all grew out of 'em long ago.

Grab some tissues, this one's sad: VW asks fans to say g(o\!/o)dbye to its iconic Beetle and welcome in the company's new electric-powered future in ad.

Ah, thanks for reminding me of another thing one had to adjust to with a Beetle.

I lived in 4-season country. With snow on the road, the Beetle would always go. Where it would go seemed almost random.

We left mine parked in the city Park once, and came back to find that some group of someones had lifted the front end, rolled the car forward, and left the front wheels on the grass side of the 12" high parking guardrails. Turned out not to be that difficult to reverse the procedure with 3-4 teenagers.

I still have memories of being driven around in one when I was a kid. I remember being in a valley with nowhere to go but up with all roads snow covered, no matter which road was chosen it was a no go until the driver turned the Beetle around and went up the hill backwards. As a kid this was hilarious and the talk of the playground the rest of the week.

Frontwards backwords--it was hard to tell with the old Beetles. They actually did well traction-wise in the sand, anyway---hence the VW thing and dune buggies and military Jeeps. In a sense, Beetles could be transformed into some serious off-road vehicles. 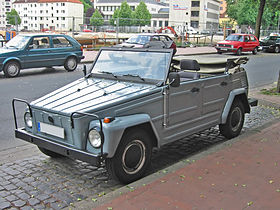 The Volkswagen Type 181 is a two-wheel drive, four-door, convertible, manufactured and marketed by Volkswagen from 1968 to 1983. Originally developed for the West German Army, the Type 181 also entered the civilian market as the Kurierwagen (“courier car”) in West Germany, the Trekker (RHD Type 182) in the United Kingdom, the Thing in the United States (1973–74), the Safari in Mexico and South America, and Pescaccia in Italy. Civilian sales ended after model year 1980. Manufactured in Wolfsburg...

I spent 3 years delivering pizzas, in northern NY, while going to college.

I had studded snow tires on all four corners of my Beetle and there were lots of nights when the snow plow and I were the only ones on the road.

That Beetle could get through anything.

The only other comparison I can make is with a friend's 2005 Toyota Matrix...
That car was the true definition of a lemon, right down to having brakes that failed to stop it from the very day that it was bought, and many other problems besides.

A chuckle for you -

Here are a couple of pics of my daily driver back in 1981...hand painted for me by an artistically MUCH more talented friend.
6V starter - all else 12V despite its vintage, engine improvements as well so it was a nifty little ride for its day.
(My only unfulfilled wish for it was somehow to transplant some front disc brakes onto it !!) 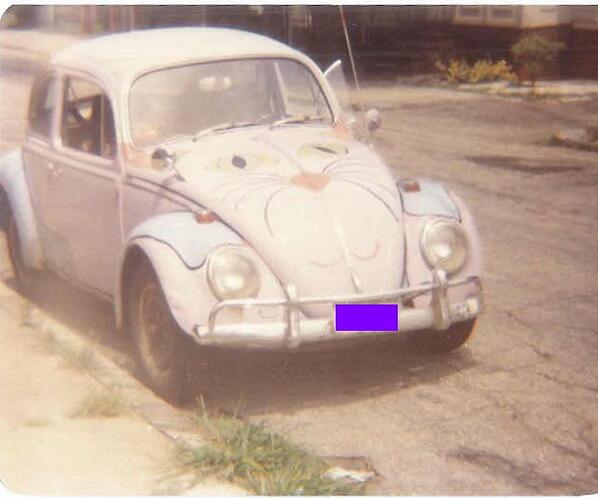 PS:
Being a native New Englander, the only winter storm that ever kept me off the roads was the blizzard of '78, and that was because the roads were officially CLOSED !!
Aside of that, the old veedubs usually had retreads or used tires on 'em due to youth & economy, and I only ever had a single blowout with no harm resulting.

The only real winter failings of the veedubs was that they most resembled sleds due to their unavoidable lightness - but they got around well enough in the snow for us guys.

What I was aiming at by saying more winter-worthy here was Swedish cars - built for winter driving, really, and when they have good studded tires on 'em it takes some really greasy roads to make 'em slip'n'slide a'tall.

Its a real shame that there are no more (genuine) sorts of them being made anymore after being corrupted by their foreign owners into mere wannabees or gone for good as with the Saabs.

All that having been said=>
Our AWD Subaru with only (non-studded) winter tires gets through our Vermont winters very, very well and is also loads more comfy than those old veedubs ever were !!

A chuckle for you -

That dangnabbed matrix WAS a toyolet for sure - and a short while later we DID flush it away !!