Taking recomendations for a new phone

Found out the hard way about the AT&T 3G shutoff today (I'm on FreeUp) so it looks like I'm on a quest for a new phone like it or not (currently using a Samsung G S5.) I don't need anything glorious (think around a $150USD or so budget)

Wish list:
Full compatibility with all US carriers (will settle for just Verizon and AT&T compatibility)
MicroSD slot
Removable battery (cause I tend to hold on to things for quite some time)
Has a decent camera as a nice to have

You might be able to find a used samsung xcover pro for under $150.

Very basic camera performance but otherwise fits your list.
The main issue with the e6, and why I hesitated, is it is stuck on Android 9 forever unless you're truly a "phone_nerd" and can mod it to newer, no idea if there is even support/ROMs for the e6.

I suspect that the Samsungs mentioned may not even officially be on Android 9, they may have more robust ROM community though.

Yes unfortunately moto ditched their winning formula after the e6.

The samsung xcover pro has android 11.

The Moto G Pure might be easier to find now, and in a similar price range. No removable battery, though. (It's also quite a bit larger, which might be good, or bad....)

I've used the Tracfone variant of this TCL A30 for a few weeks, and it reminds me of a slightly upgraded Moto E6 (more RAM, 32GB storage, similar size, replaceable battery.) The factory unlocked version is $100 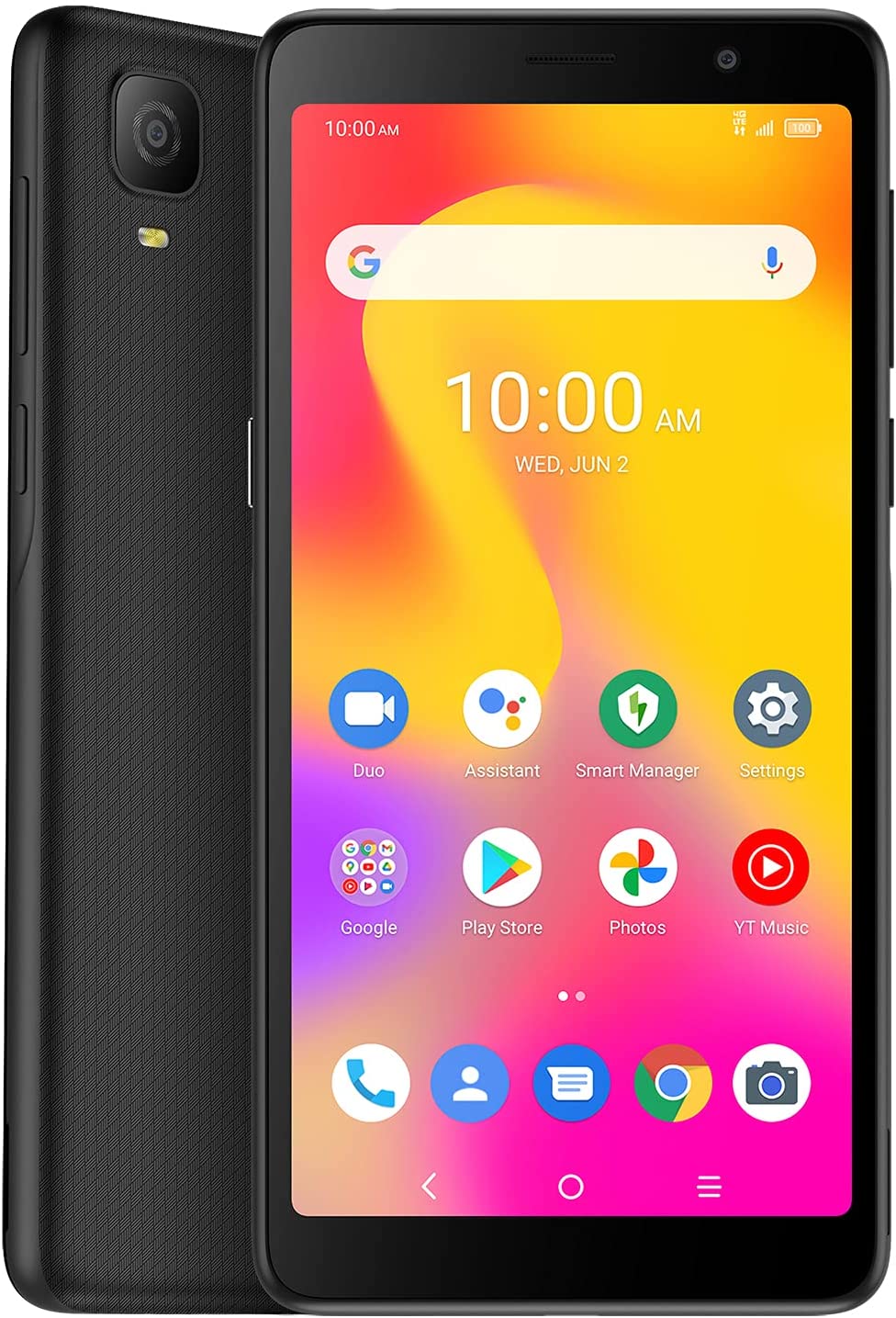 Network Compatible with the AT&T, T-Mobile and Verizon LTE networks. This device has been certified for use on the Verizon LTE network, if your device is not receiving messages or experiences an error when making phone calls on Verizon, your account...

WiFi reception is a little weaker than the Motos, I think.

The Moto G Pure might be easier to find now, and in a similar price range. No removable battery, though. (It's also quite a bit larger, which might be good, or bad....)

I've used the Tracfone variant of this TCL A30 for a few weeks, and it reminds me of a slightly upgraded Moto E6 (more RAM, 32GB storage, similar size, replaceable battery.) The factory unlocked version is $100
https://www.amazon.com/TCL-Unlocked-Smartphone-Display-3000mAh/dp/B09B79YT3S
WiFi reception is a little weaker than the Motos, I think.

phone-nerd, looking forward a little-- I know several people (me incluided) on older FreeUp lines also needed to contact FreeUp to enable VoLTE on the SIM card. If your replacement phone doesn't immediately manage VoLTE after confirming the APN settings are correct, reach out to them. My lines took about 24 hours from my initial inquiry, to a reply & a fix. I think early-adopters of the FreeUp plans were before AT&T even allowed MVNOs to provision for VoLTE.

....
I've used the Tracfone variant of this TCL A30 for a few weeks, and it reminds me of a slightly upgraded Moto E6 (more RAM, 32GB storage, similar size, replaceable battery.) The factory unlocked version is $100
https://www.amazon.com/TCL-Unlocked-Smartphone-Display-3000mAh/dp/B09B79YT3S
WiFi reception is a little weaker than the Motos, I think.

Is the TF version of the TCL A30 you linked to the A3X? https://www.amazon.com/Tracfone-Alcatel-32GB-Prime-Black/dp/B09CLPL1R1
Or ??

Looking over phone spec./comparisons sites without the specific TF version model # there are quite a few TCL A3(something) including a plain old A3 so a bit confusing. Some have 2GB RAM, some 3. I'm sure some are the international version. Even the TF A3X model #s I find varies a bit (TFALA600DC3PWP or TFALA600DCP etc.)

Other than being locked to TF for 60 days does the TF version of the TCL A30 have any notable lower specs or missing bands?

The Tracfone variant is the A3, not the A3X (The A3X is larger.) To be honest, I haven't gone through the specs with a fine-tooth comb: Tracfone's tendency in the last couple of years has been to 'brand" (and of course, lock, and load bloatware on)' standard manufacturer models, most commonly the all-carrier factory-unlocked version. The Trac TCL A3, and the factory-unlocked A30 are physical matches (they accept the same cases and screen protectors), have the same memory/RAM, the same carrier compatibility, and the same rather unusual side button for direct Google Assistant access.

Re: Tracfone "model #'s"-- the ones you listed are really retail-distribution SKUs, not model #'s. For example all Tracfone Group TCL A3's are model # A509DL, whether it's packaged for Tracfone, Total, Simple Mobile, Walmart Family Mobile, etc. The final letters in the SKU identify which brand's retail packaging the phone is in, and which network SIM is loaded (for the subsidiaries that offer more than one network.) For a few models, notably the Trac Moto E6, LG Journey, and ?, I think there will also be different suffixes that identify whether it's the 16GB memory version, or the later 32GB version.

I haven't had a chance to confirm bands between the Trac A3, and the factory-unlocked TCL A30, since I just got them unlocked about a week ago. I know that Mint Mobile's IMEI test says the Trac A3 has all the T-Mobile LTE bands (including 66/71), and it's specifically listed on the AT&T whitelist (by the Tracfone model #). Unfortunately, Tracfone-issued "specs" almost never include available band info.

.....
I haven't had a chance to confirm bands between the Trac A3, and the factory-unlocked TCL A30, since I just got them unlocked about a week ago....

Thanks for all that info. I figured that the different suffixes had something to do with the "packaging".

Curious re unlock since you've only had them a short time. We're they "naturally" unlocked by TF after being on TF +60 days (just not in your hands for that time) or are they an easy aftermarket unlock?

Would be curious to hear back if you find band differences vs. A30.

My Tracfone A3 phones were unlocked by Tracfone on the 60 day schedule, which has been very reliable if you follow the rules.
There aren't any 'easy' aftermarket unlocks for Tracfones, which are locked down pretty well. A very few models (not including the A3, as far as I know) can be unlocked by an aftermarket method that requires connecting the phone to a PC & allowing remote access to your PC via TeamViewer or similar to do the work on the phone.

I have had had 2 Tracfones unlocked by the remote unlocking services-- an older TCL LX, and a Samsung A10e. It was interesting, as far as I could follow the process. The LX appears to have been flashed to different firmware (not usually possible with Tracfones), and the A10e seemed to be more straightforward (but cannot be done if the phone has updated the Android build too far). At least the A10e lost the capability of auto-loading APNs, which can make it a pain to get set up on a different provider. (But this was forewarned by the unlocker.)

We've used Tracfones as either primary phones or backup phones for years. The new official unlocking policy is so cheap and easy (60 days, and $20 in service refills) that it doesn't make sense for me to use aftermarket unlocking services now-- I used the aftermarket service because the 2 phones were under the old 12-month unlocking policy, and some family members were between a rock and a hard place to replace phones due to the AT&T whitelist issue.

Back to the band issue & Tracfone variants: I found it interesting that if you look into the FCC ID of some Tracfone 'DL' models, they're approved under the same FCC ID as the factory-unlocked variant of the phone. My (minimal) understanding is that this means there cannot be any hardware difference between variants having the same FCC ID approval, so they must have the same bands available at the hardware level. I don't know that this precludes a software-block of certain bands, but if that's allowed the only bands that would make any sense for Tracfone to block via software would be AT&T-exclusive bands, as Tracfone relies on both Verizon and T-Mobile compatibility across their subsidiary brands. (And even AT&T, in the rare markets not served by Verizon, but served by AT&T-- there are still Tracfones with AT&T SIMs packaged for retailers like Walmart in those areas.)

Glad to see that posts have been recovered from the changeover. Anyways, I gave up on the removable battery part and got a Moto G Power (2021 4GB RAM/64GB storage version) off of Ebay. Overall it's not bad, save for a few annoyances such as not being able to record 60fps video in OpenCamera (seems to only work in the "official" app), the two non-main rear cameras being borderline useless due to being such a low resolution, and the inability to disable pixel-binning on the main camera.

I actually have a brand new Moto G Pure if you are interested. PM if so

Hi Kent, just wondering how you were able to get 60 days of TF service for only $20? With TF phone purchase their lowest plan is $20 per month or $15 with auto refill.

Not all phones sold for / by TF require a plan purchase. If you can get one without a plan purchase, you can use either of these to get 60 (or more) days service for $20:

Hi Kent, just wondering how you were able to get 60 days of TF service for only $20? With TF phone purchase their lowest plan is $20 per month or $15 with auto refill.

Tracfone offers old-school 'basic' phone plans-- the ones that were intended to be used with feature phones, the original one-buckets phones, and phones with TMFL (Triple Minutes for Life)-- the plans Boz linked to. They have very little in the way of allotments, but the 30-day refill is $10, and the 90-day refill is $20.

Even though Tracfone doesn't really want you to use these plans with current smartphones, they will absolutely work with any phone. (Although it's always possible that Tracfone might get more restrictive about what phones they can be used on.)

The Tracfone website makes it difficult to get these plans to show up when you're refilling a normal smartphone, and I've seen some reports from folks that the website won't permit buying a 'basic' phone plan for initial activation of a normal smartphone. (This seems hit-or-miss.) But if you buy the plan & PIN from Tracfone's Ebay store, or from Target, Best Buy, etc. (including digital delivery of e-PIN), they've always worked just fine for initial activation or later refill of any phone.

FWIW: it does appear that the tracfonewireless Ebay Store restricts purchase of the basic plans to something like 2 refills of a particular value over some period (maybe 60 days?) I've gotten around that limitation by having a second Ebay account.

I've tried using these basic plan pins for initial activation of a smartphone and they never worked for me. But subsequent top ups work fine. Use the app if the website gives you issues.

I also tried an a3 recently from tracfone. I'd rather have the moto e6. They seem to optimize that phone a lot better. The e6 just seems a step up to me. The a3 went straight to visible for a swap.

Thanks for that! It looks like the last time I did a new smartphone activation with a basic plan was March 9, so maybe they've tightened up on that. I hope to try another in a few days.

I like smaller phones, and we have Moto E6, TCL A3, and Samsung A01, all similar size. I agree that the E6 (and the Samsung) have a more polished feel. The TCL has more memory, more RAM, and is the only one of the 3 (Tracfone variants) on the official AT&T whitelist. That's enough for me to keep it. Currently, we have a factory-unlocked E6 on FreeUP (AT&T), the TCL on Tello, and I'm thinking of using the Samsung on a FreedomPop Walmart (T-Mobile) line.