Quaking the Dead in Trona

With all the recent news coverage about the large earthquake in Ridgecrest, CA there has been little said about the nearby town of Trona of which the earthquake added insult to injury to this down and almost out salty town. Not long ago I had the pleasure of driving through this interesting off the map place and made a stop at the Family Dollar store shown in the article, which seemed to be the only "thriving" business in town. I agree with one of the locals that the "quietness" of the town is inviting if not a bit eerie.

"Even Trona’s dead were impacted by the two large earthquakes. At the Searles Valley Cemetary, vases and even tombstones were toppled by the earthquakes and a few graves caved in."

"A number of Hollywood films have been shot in the surrounding desert (particularly around the Trona Pinnacles), including Star Trek V: The Final Frontier and Planet of the Apes.[2] In the 2000s, the town itself served as the setting for three films, Trona (2004), Just Add Water (2008) and Lost Lake (2012).[9]"

"Trona is known for its isolation and desolation,[2] as well as the nearby Trona Pinnacles. The local school plays on a dirt football field because the searing heat and highly saline soil kills grass. At one point it boasted an 18-hole golf course that was all sand except for the "greens", which were a softer grade of brown colored dirt." 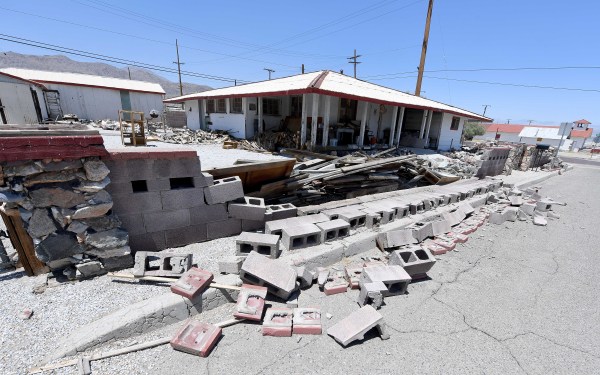 ‘People are trying to get out of town, because they think another quake’s coming,’ one resident said.

Trona is an unincorporated community in San Bernardino County, California. In 2015 it had a population of approximately 1,900. Trona is at the western edge of Searles Lake, a dry lake bed in Searles Valley, southwest of Death Valley. The town takes its name from the mineral trona, abundant in the lakebed. It is about 170 miles (274 km) northeast of Los Angeles, on State Route 178. The ZIP code is 93562. Trona is known for its isolation and desolation, as well as the nearby Trona Pinnacles. T...

I was just in Trona 6 weeks ago. We stopped there on the way to camp in Death Valley.

Other than one speed trap and a surprisingly nice looking high school there definitely wasn't much going on there.