" according to three people briefed on the matter." Let's hope these unknown three people with "insider" knowledge, who are evidently connected to the 60% Sprint stock rise, are correct. 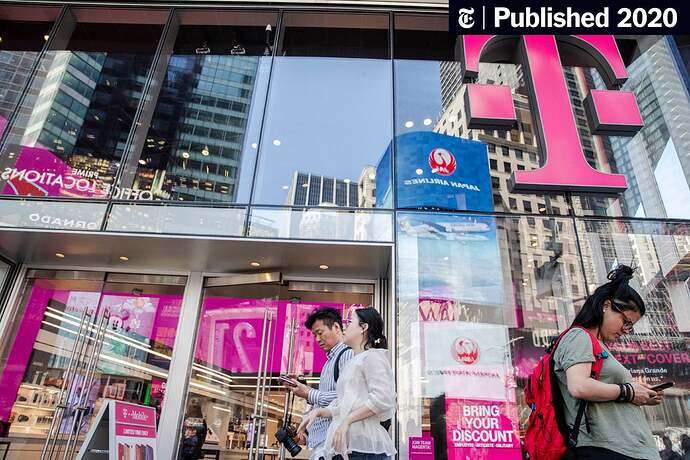 A last-ditch attempt by a coalition of state attorneys general is said to have failed to halt T-Mobile’s purchase of a smaller rival.

Done deal, indeed. We should have bought some Sprint stocks a week ago. But let's see what the California regulators do, given California is the 6th largest economy in the world where 1 out of 8 US citizens reside. 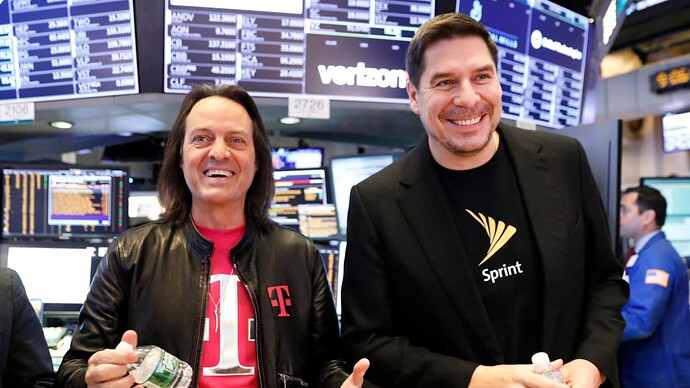 The ruling clears one of the final hurdles for the deal. 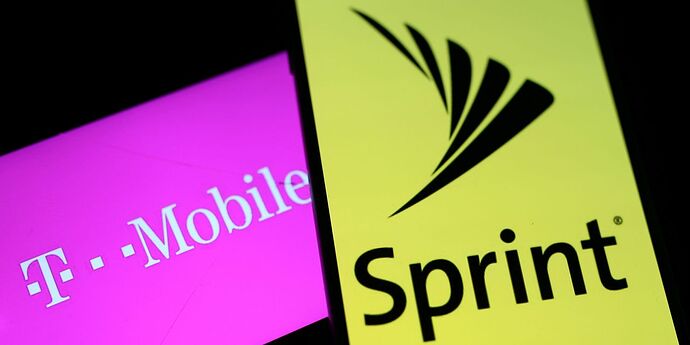 T-Mobile and Sprint are waiting for a federal judge to rule on whether they can merge, but the companies face another hurdle even if they overcome that legal challenge: the California Public Utilities Commission.

Not as impressive as Tesla over the last month.

I read somewhere yesterday that current Sprint customers would transition to T mobile accounts and network and Sprint MVNO customers would become "Dish" customers. Whether that is true or not is anyone's guess.

It will be T-Mobile.
The question about Sprint's multiple mvno's is a big one, and one that likely consumes the thoughts of the MVNO's, too.

T-Mobile has promised to honor (at least some) pricing for MVNO's, at least for those who requested a price-protection guarantee for some number of years. (This will likely be protection only insomuch as T-Mobile decides not to poach those customers away from MVNOs by possibly temporary price reductions on the mothership, and I might guess there is plenty of wiggle-room in those promises.)

There will be a period when the Sprint network continues largely untouched (other than that there will be no additional investment in dedicated Sprint backbone.)

...Followed by a period of repurposing towers & eliminating some. (LIkely meaning worse coverage for those still using the Sprint network.) There will likely be a period when the network availability is 'merged' between the 2 carriers, allowing subscribers to both networks to use service on the other. (Limited to those phones that have the capability of accessing both networks, which won't be many of the older Sprint-network phones.)

I agree completely that some of the Sprint MVNOs have been industry-best, some in terms of pricing, some in customer service, and a few in both categories. I hope the good ones all find a viable way forward.

"It ain't over til it's over." There may be "one more thing", as Steve Jobs was fond of saying, before "done deal" can be said, for Deutsche Telekom has to agree to the terms of the deal, which they seem to want to change.

Deutsche Telekom pushed to change the terms of T-Mobile US’ proposed merger with Sprint due ...

Both of us here have services with Twigby which have been flawless.
As a Sprint MVNO they, and we - stand to lose out if all goes T-Mobile.
For once I must say that I hope that this particular aspect of the status quo sticks around for a good, long while !!

....duh.... seems like both of those were givens, considering that folks started writing off Sprint when the merger plans were announced. It seems logical, and to T-Mobile's advantage if the merger should go through, for Sprint to avoid investing in changes/improvements to the network that would have been wasted funds if the merger went through.
I suspect that Deutsche Telecom is just playing hardball here to see what concessions they can get. A lot of experts believed that T-Mobile's interest in absorbing Sprint were 1) spectrum holdings & towers, 2) eliminating the cost pressure of a low end carrier, and 3) Sprint's customer base. It appears that the only thing on that 'short list' to have changed since 2018 might be the customer count, and it's likely that a significant portion of a decrease may been due to buzz about the merger.

[i]February 13, 2020 5:00 am by James Fontanella-Khan in New York, Nic Fildes in London and Miles Kruppa in San Francisco.

Deutsche Telekom, the parent company of T-Mobile US, is pressing to renegotiate the terms of the American wireless carrier’s takeover of Sprint, in a move that threatens to further delay or even scupper the 2018 deal that was given court approval this week.

The German telecoms company, which owns more than 60 per cent of T-Mobile US, wants to cut the price agreed for Sprint two years ago because the shares and performance of the company have deteriorated, said two people close to DT.

The move is opposed by Sprint’s controlling shareholder, SoftBank of Japan, according to people close to the its chairman Masayoshi Son.

The stand-off sets the stage for what could be a protracted and bitter battle to get the deal done.

After two years of regulatory limbo, a federal judge on Tuesday cleared the combination of the number three and number four mobile networks in the US without imposing new conditions. The ruling, in a case brought by a group of Democratic-led US states, endorsed the companies’ position that the acquisition creates a stronger competitor to larger rivals Verizon and AT&T.

Judge Victor Marrero said he dismissed the states’ competition concerns partly on the basis that Sprint risked going out of business if the deal collapsed.

“While Sprint has made valiant attempts to stay competitive in a rapidly developing and capital-intensive market, the overwhelming view both within Sprint and in the wider industry is that Sprint is falling farther and farther short of the targets it must hit to remain relevant as a significant competitor,” Mr Marrero wrote in the conclusions of his 170-page ruling.

The judge’s stark remarks about Sprint’s future have emboldened Deutsche Telekom in its view that it would be unacceptable to simply accept the terms agreed in 2018, said three people close to the company.

Under those terms, Sprint shareholders would emerge with a third of the combined company, but in the intervening period Sprint’s earnings before interest, tax, depreciation and amortisation have remained roughly flat while T-Mobile US’s are up around a fifth. The value of the offer has risen from $59bn in 2018 to $74bn now, including Sprint’s debt.

Before Tuesday’s court ruling, Sprint shares were trading at a 45 per cent discount to the implied value of the deal, but even after a sharp rise after the decision they remained at a discount of 12 per cent, implying the market remains wary about the deal’s prospects of closing on the 2018 terms.

T-Mobile US has the option to walk away because the long delay meant the deal formally expired towards the end of last year.

Most analysts believe the wireless company and its German parent have very little appetite to pull the deal entirely, however, partly because it needs Sprint’s spectrum to be competitive in the looming race for 5G.

“On the merits, there should be a substantial recut,” said Craig Moffett, a telecoms analyst at MoffettNathanson. “The ratio was overly generous from the beginning, and the deterioration at Sprint since then only argues more strongly for a renegotiation. The blow-ups at We Work and Uber also make it clear that SoftBank is negotiating from a weak position.”

But he added: “T-Mobile’s negotiating leverage entirely hinges on their willingness to walk away. And I don’t think anyone would take the idea of T-Mobile walking away seriously.”

T-Mobile US, Sprint, SoftBank and Deutsche Telekom declined to comment.

T-Mobile can have Sprint now. The question is whether it wants it at the mooted price. On Tuesday, a New York federal court declined to block the merger of the third and fourth-largest mobile phone providers in the US. Several states had fought the $59bn deal on worries of higher consumer prices. Judge Victor Marrero has bought the sob story put forward by the two companies: that each is too meek to compete with titans AT&T and Verizon as 5G networks are rolled out.

The fortunes of T-Mobile and Sprint have diverged for years. The former instituted an aggressive low-price strategy and grabbed massive market share gains in an otherwise mature industry. In contrast, Sprint’s $33bn net debt load had become an albatross around its neck, dragging it towards bankruptcy. Since the deal was announced nearly two years ago, T-Mobile shares are up nearly a third. Sprint stock is down more than a quarter. The exchange ratio fixed in April 2018 gives a third of the company to Sprint shareholders, led by controversial Japanese tech group SoftBank. That appears too generous today.

T-Mobile’s low-price strategy has continued to work in the past two years — its annual ebitda is up nearly a fifth. Sprint’s operating cash flow, in contrast, has remained flat. Based on the market worth of each company before the court ruling on Tuesday, Sprint’s equity value accounted for just a fifth of the total. As the deal will give a third of the combined group to Sprint shareholders, Sprint shares rocketed 73 per cent.

Sprint argues that its ultimate value to T-Mobile comes in its spectrum hoard, which its purchaser can tap for its 5G network. After fighting an expensive regulatory battle for two years, T-Mobile is not likely to walk away now. But it does have the ability to re-cut the exchange ratio. Then again, the hassle may not be worth it. A complex integration lies ahead. Huge cost savings should be possible, suggesting T-Mobile shareholders will do just fine. If the terms remain unaltered, it would be a big — and increasingly rare — win for SoftBank.[/i] 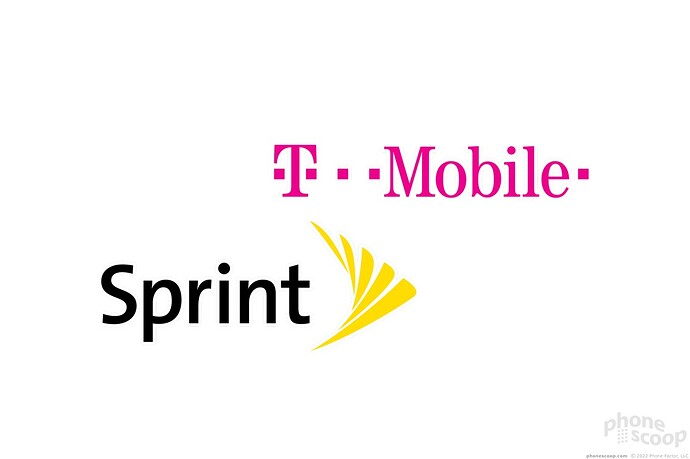 New York State Attorney General Letitia James issued the following statement today regarding the recent court decision to allow the merger of T-Mobile and Sprint: "After a thorough analysis, New York has decided not to move forward with an appeal in...

"T-Mobile claims the merger may close as soon as April 1st."

"T-Mobile claims the merger may close as soon as April 1st."

Will you believe it if they announce it on April 1st?

Almost done, save for the necessary approval of the California Public Utilities Commission.

Sprint and T-Mobile agree to give Deutsche Telekom higher stake in combined...

Common shareholders won't see a change in the exchange ratio.

What happens to TMobile users who have an older grandfathered plan?

What happens to TMobile users who have an older grandfathered plan?