Ads, payments, monetization and all of that

Ever since troubles emerged in March it has been interesting to look at ad vendor practices in the app monetization world and see how cellnuvo fits into all of that. This is just my own research over the past few months.

Payment terms
Ad vendors usually pay monthly on a "net x days" basis. So net14 or net-14 means after the end of the month payments are made within 14 days. There may be a little extra time added for certain payment methods eg paypal may take 5 days to process.

Interestingly here are some of the terms of cellnuvo's past and current providers as well as some others:

As you can see the standard terms are far from the "up to 4 months" claimed by cellnuvo. Most are less than half that. That is not to say they are necessarily deceiving us. There may have been cases of late payment or minimum earnings limits not being met that delayed payments (Eg Tapjoy requires $300). But on average I suspect it is closer to 2 months than 4 months.

I certainly think that once cellnuvo are out of the current mess there is scope to speed up payments. I think we should be pushing for them to bring it down to at least 2 months.

With Tapjoy paying within 45 days it is extremely concerning that cellnuvo have not been paid for 8 months. Since I have old earnings part of me is happy cellnuvo continues to try to pay them (I assume out of new earnings) but on the other hand it is also not particularly fair towards new swiping and users. I think cellnuvo is betting that if current customers get paid then more will start swiping again. So it is best to pay the backlog first. If so we are in for a rocky rest of 2019 but hopefully they can turn it around after that.

Payments for ads
The main industry figure for comparison is called eCPM (effective cost per mille) which basically means cost per 1000 ad impressions. Whether that be per click, completed ad etc.

For example pollfish quotes an average eCPM of $62 or 6.2c a completed survey. With some app publishers earning $200 or 20c a survey.

Here is an interesting chart comparing some eCPMs across 1400 apps: 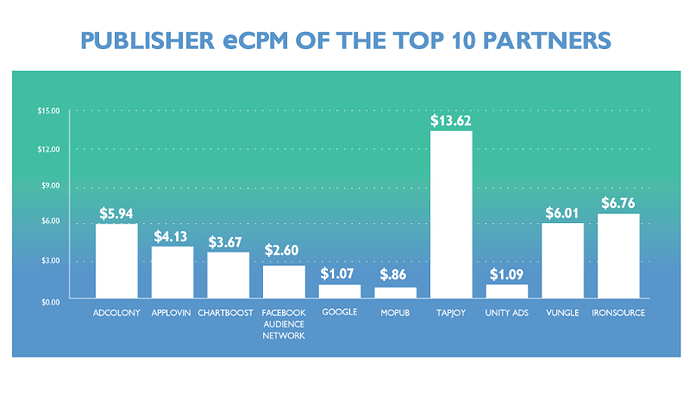 You can imagine the eCPM varies a lot depending on the app and number of users etc. An app like Candy Crush is going to be earning a lot vs the smaller apps. With cellnuvo being pretty small I would expect it to be lower than those shown in the table. But the table could still go a little way towards explaining why cellnuvo is currently unable to serve higher paying ads. Tapjoy (old ad provider) paid over double that of AdColony (current ad provider) in the study. Which may be why the tapjoy ads earned 15 points in cellnuvo and the ad colony ones only 5 points.

Without any information about their overheads it is impossible to say if cellnuvo can afford to pay cellnuvo users more per ad. But even at a modest $3 eCPM (0.3c an ad) they are earning 6x more than they pay out as instant swaps (0.05c an ad). If they can keep their overheads and running costs low it is easy to see how they could be profitable. Well at least before many users bailed and numbers dwindled.

There was a lot of desire for an iOS app and many delays. It is interesting to note that Apple's policies on ads are stricter than Google. For example recently Apple banned offerwalls like what used to be the left swipe in the cellnuvo app where games and other things could be downloaded and used in return for points. That is bound to make developing an ios version of the cellnuvo app a lot harder.

Not that any of this really matters that much. We all just want to be paid for our swiping.