I've never been a gamer, apart from Pong, and seeing some games on my son's Atari system back in the 1980's, yet I thought the following interview with and history of independent and experimental game developer Lucas Pope might be of interest to gamers and non gamers alike. One game, "Gearhead Garage" sounds close to home, for the notion of fixing a car and then not driving it is not unfamiliar. 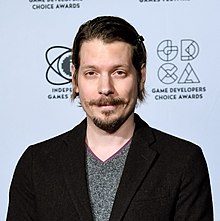 Lucas Pope (born 1977 or 1978) is an American video game designer. He is best known for experimental indie games, notably Papers, Please and Return of the Obra Dinn, both of which won the Seumas McNally Grand Prize alongside other awards. Pope currently resides in Saitama, Japan. Pope grew up in Virginia. His father was a handyman, which gave Pope access to a well-stocked array of parts and tools to mess about with, giving him interest in mechanical engineering. When he got to high school, he me...