One could say Sears was the Amazon of it day, and thrived for more than 100 years. Sears lived a long life much like many of the products it sold, such as Kenmore, Craftsman, and Diehard, to name a few. I still have craftsman tools I have used for 50+ years, and some of the $600, give or take, houses it sold as kits via catalogue are still standing. The winds of change spare no one.

Sears, Roebuck and Co., commonly known as Sears, is an American chain of department stores founded in 1892 by Richard Warren Sears and Alvah Curtis Roebuck and reincorporated in 1906 by Richard Sears and Julius Rosenwald. What began as a mail ordering catalog company migrated to opening retail locations in 1925, the first in Chicago, Illinois. In 2005, the company was bought by the management of the American big box discount chain Kmart, which upon completion of the merger, formed Sears Hol Sea... 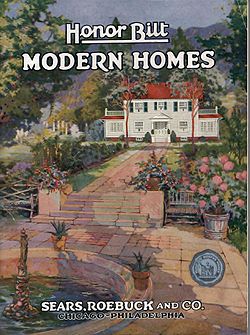 Sears Modern Homes were catalog and kit houses sold primarily through mail order by Sears, Roebuck and Co., an American retailer. From 1908 to 1940, more than 70,000 of these houses were sold in North America, by the company's count. Sears Modern Homes were purchased primarily by customers in East Coast and Midwest states, but have been located as far south as Florida, as far west as California, and as far north as Alaska and Canada. No comprehensive list of their locations exists. More than 3...

Sad news, but expected given the nature of things nowadays.

Way back when I reached adulthood just about all the tools of my (then) chosen trade bore the Craftsman name, with very few exceptions for specialty tools that they did not offer.
Then they cut their lines down farther & farther to where the lifetime warranteed tools got replaced with cheap un-warranteed junk a bit too often.
(Good thing 3rd parties still offer improved battery packs to replace the utter junk NiCd ones that their cordless tools came with !!)
The only sadness here is that over time ratchet mechanisms will wear out & no replacements from there will be possible.

But I -will- miss Kmart !!
Here's why=>
Years ago 90% of my clothing came from the Ames stores - decent quality & good pricing...then it got forced out of business by a movement that nobody could explain. Poof, gone.

So, next I found that Kmart was almost as good, especially the jeans that they are the only source of which are well made & fit comfortably.
Now...most likely that chain is toast as well...leaving what ??
Pretty much only wally-mopp. Meh.
Poorly made, ill fitting jeans (I've tried the nasty things).

Could be that I've enough clothing to keep my old self properly covered until it is time to leave this bankrupted world though, so I guess it is really not too big a deal so long as I don't mind having some tears & stains.

Greed has finally driven quality right off the planet, to oblivion.
A terrible commentary about our species.

Too big to fail not in this case

For those 'less than a certain age', or who didn't grow up in a small town pre-internet....perhaps it's just a store closing.

I grew up in a small town. Mostly, one store of each type. One hardware store, one lumber yard, 1 general-purpose clothing store, 1 10-cent store. But we had a Sears catalog center where large items could be picked up after ordering, and Sears catalogs were likely in everyone's homes. It was our window into the larger world, and the place we could get all the same stuff that was available in the city.

Kenmore appliances were in most homes, and Craftsman tools in most garages, Sears tires and batteries, too.
I still have a hand-me-down Kenmore vacuum, circa 1970. My toolbox has 'heirloom' Craftsman tools from pre-war to early 1950's, and they still see regular use.

Young'uns have no way to recall that Sears, Roebuck & Co. was actually a cultural phenomena for quite a while.
Also, for many years it also held the largest credit network on this planet.

Personally, I got ~40 years out of over $10k (original value) of Craftsman hand tools, and have been blessed with a long string of Kenmore vacuums all from the same line & using the same bags too - and in fact I was just recently gifted with the best of that line I've ever had & gave my 'spares' away to some folks what needed 'em.

So I strongly disagree with the notion that it is 'just a store', even if limited to what was shown in the article that Isamorph shared:

Sears, which still has nearly 900 stores

If it goes away all the folks who worked there will be cast into the pool of the many jobless castaways marking the era we're living in - which witnesses all the slave labor like places (Amazon, Walmart) barely employing those desperate enough to work & live on such low benefits.
A sad commentary indeed, I think, still.

Kenmore vacuums were just private label. In fact when they replaced Panasonic with China vacuum for same price I was able to find the same vacuum with Panasonic printed on the machine for over $130 less

Sears never made Kenmore vacuum
Although I use kenmore bags in my Panasonic since it is same maker if the Kenmore brand we used.

One could say Sears was the Amazon of it day, and thrived for more than 100 years.

Exactly! Browsing the seasonal Sears and Roebuck catalog was like browsing today's internet.

I don't think there was anything you couldn't order from Sears. They will be missed.

Kenmore vacuums were just private label. In fact when they replaced Panasonic with China vacuum for same price I was able to find the same vacuum with Panasonic printed on the machine for over $130 less

Sears never made Kenmore vacuum
Although I use kenmore bags in my Panasonic since it is same maker if the Kenmore brand we used.

(There is a lively online community of Craftsman tool lovers who spend a lot of time figuring out what contract manufacturers built Craftsman products through the years.)

You need to find the buyer who worked in that department to find out. My guess it is more then one supplier. Or find the shipper. The container co would know.

The Sears of 1800's was amazing and very different then the Sears today.

I have done my share of buying from Sears. I just wont miss them.
Vacuum, treadmill. Ect

I remember when I bought two expensive tv from maycs . Times change

I had an interesting conversation with a salesman in the electronics (or home entertainment) department at a major department store some years ago. Can't remember whether it was Macy's, Dillards, or something similar. My wife and I went to shop for clothing. I was finished with that in 15 minutes, while my wife was likely to spend considerably more time. So, I wandered, and ended up in the electronics department. I was surprised to find the selection pretty good, and the pricing very competitive to the electronics box stores. The sales person explained that I fit the demographics of their typical shopper in that department-- a 'significant other' waiting for the partner to finish shopping for clothing or kitchenware. Since few came to the department store specifically to shop for large electronics anymore, both selection and pricing had to be competitive in order to make sales. (While in my opinion, neither selection nor pricing of the clothes impressed me......)

Sears, intentionally or not, contributed to a sort of recycling of paper and maybe composting as well.
"By that time(1933), the Sears catalog had long been known in the industry as "the Consumers' Bible".[citation needed] Novelists and story writers often portrayed the importance of the catalog in the emotional lives of rural folk. The catalog also entered the language, particularly of rural dwellers, as a euphemism for toilet paper, as its pages could be torn out and used as such.[18]"
Even back in the 1950s, many people still used outhouses, where an outdated 300 page Sears' catalogue came in handy, as I keenly remember from visits to my grandparent's farm. I'm not sure how much great literature Sears and its catalogue inspired, though.

Hubris before the fall of Sears

"Lampert has maneuvered out of tight spots before, most famously when he persuaded four men who kidnapped him in January 2003 to let him go after holding him for 30 hours, blindfolded and handcuffed, in a motel bathroom. But saving sinking Sears required more than fast-talk."

“He’s been doing a lot of financial engineering, but he’s just been moving around the deck chairs on the Titanic,” said Van Conway, a restructuring expert who worked on Detroit’s bankruptcy. “It looks like he’s played almost a full deck of cards by now.”

I've read a number of reports about Sears' financial situation. (My apologies if similar information is included in the links above.) At least some analysts point to the one over-whelming difficulty Sears has faced in trying to engineer a turn-around: large pension obligations, and court insistence that any income (like the sale of Craftsman, or real estate) go first towards funding those pension obligations. If this is so, it becomes a pit almost impossible to claw out of, since even significant income can't be used to sustain the company, but only to shore up the pension plans. I'm in favor of pension plans, and funding them-- but it kind of seems like the best support for the pension plans is whatever plan would allow Sears to exist into the future.......

"Sears, once the largest retailer in the U.S., has now filed for bankruptcy protection and said Monday morning it plans to close 142 more stores this year — adding to the stores the retailer already shuttered in 2018." Sears is not the first nor will it be the last 100+ year old company to descend into the past. 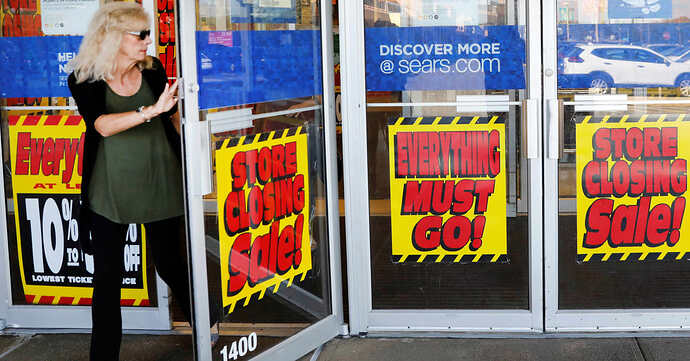 Sears says liquidation sales are coming soon for 142 stores. It wasn't immediately clear which locations would be going dark. 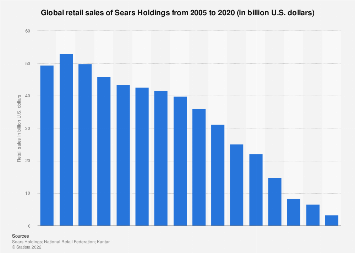 Talk about stabbing the fallen.

"'In an unusually harsh critique from a public company CEO, Conforti mocked Sears for being a company hopelessly lost in another era.
Nobody should be surprised by the Sears bankruptcy "unless they own a few Zayre or E.J Korvette locations trapped in a space-time continuum where the Sansabelt clad relax on shag carpeting, illuminated by the warm glow of a lava lamp while they drink Tang and vodka and listen to The Moody Blues," Conforti said.
'Ouch.'" 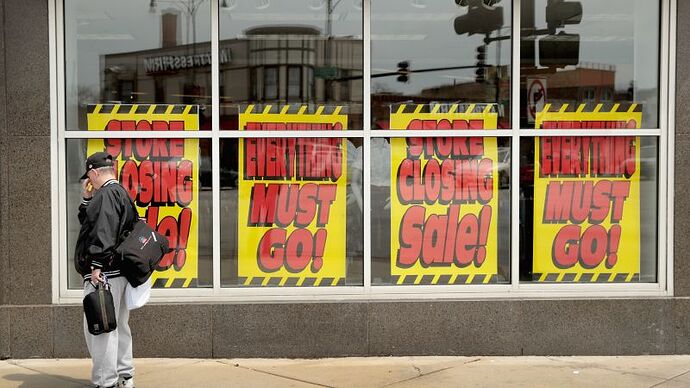 Real estate companies that lease space to Sears and Kmart are hopeful that they can now rent out space to higher quality retailers -- and get more rent from them in the process.

Went to Sears yesterday to grab some vacuum bags. Shelves empty. Clerk tried to convince me the trucks are bringing more. Sure lol