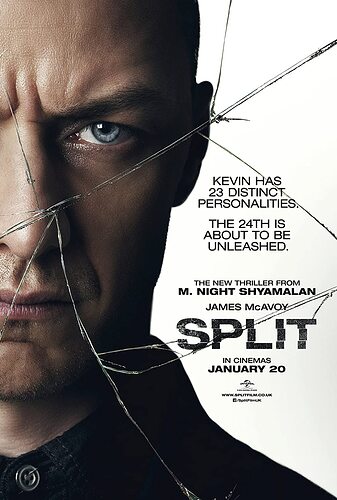 Split: Directed by M. Night Shyamalan. With James McAvoy, Anya Taylor-Joy, Betty Buckley, Haley Lu Richardson. Three girls are kidnapped by a man with a diagnosed 23 distinct personalities. They must try to escape before the apparent emergence of a...

Wow, there are actually real life cases like this!

"Split"--some think it's M. Night Shyamalan's best film in years, but it still managed but a 61 score from Metacritics, assuming they know anything. 24 personalities. Amazing---that's 22 more than I have, and 21 more than my wife has.:huh:

Thanks for the tip. I'll be watching this (thanks to the great Xfinity deal I have with HBO included).

I'm not worried about the somewhat low review scores. Sometimes these movies turn into unintentional comedies so they're a win either way!