Many folks ( work and friends) send group text messages or photo text messages these days.
I have only text and voice service. Am I stuck? out of luck? I was apparently de-prioritized during the hurricane and that is the way it is staying. I have missed out on a lot of important information in the past month
Alternatively, if I migrate to a provider with data, can I enable mms only while blocking all other data, unless I physically turn it on?

Background, tracfone will not send mms or allow downloads, I'm stuck while power is out. any workarounds you guys know of?

Thanks for the quick response lexusl21 . I've got real iffy limited internet these days. Please remind me. Is google voice only for receiving talk and text; and google hangouts for sending mms and calling out?
Apparently the new google hangouts extension only works with google chrome? If I am using another browser I am out of luck? What has happened to my phone hangouts and voice, or is it only desktop laptop that is affected?

You should be able to block background data for most, but not quite all, apps, in the settings menu on your phone. (I say most, because I haven't been able to prevent Google Instant Apps from updating via cellular data........) Make sure you go into the settings menu for Google Play, and set it to either update apps via WiFi only, or to not auto-update apps! I haven't used it, but I've seen Datally (an app from Google, available in the Play Store) recommended as a more complete control over what apps are allowed cellular data access. (Maybe someone with experience with Datally can comment.)

I'm surprised that Tracfone would be deprioritizing data more than other MVNOs using the same network-- the Tracfone group pulls a lot of weight with the networks.

For friends and workmates that might be inclined to help-- many Android phones have an option in the menu that sends group texts (plain text, without pics or attachments) as multiple 'serial' single-recipient sms messages. (Basically, cc'ing each recipient.) I think this would not let you see the full list of recipients, though, and you could only reply to the sender.

So If I use my google voice number to have all text messages voice phone calls sent to google voice? hangouts? Which one? I will receive the messages in my gmail whenever I have access to wifi? What about voicimail messages?
I'm so frustrated. voicemail messages over tracfone are still popping up on a random basis over one month after Florence. I just got my recall from evacuation, Yee haw my job may still exist! if i can get them to understandIi just got the notice back to work over 3 weeks and a second hurricane later.

Thanks for the quick response lexusl21 . I've got real iffy limited internet these days. Please remind me. Is google voice only for receiving talk and text; and google hangouts for sending mms and calling out?
Apparently the new google hangouts extension only works with google chrome? If I am using another browser I am out of luck? What has happened to my phone hangouts and voice, or is it only desktop laptop that is affected?

The Google voice app is a great sms and mms. With latest update it now has a dialer. Has taken over for handouts that seem to be going away forever.

Now when I hear chrome extension is that just for PC

I use Google voice app in areas that have bad TMobile but have wifi. Works great

"What about voicimail messages?" Here is a screenshot of the Google Voice app voicemail page on my phone, if it helps. 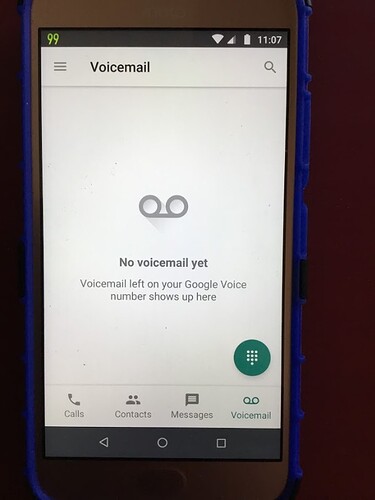 So If I use my google voice number to have all text messages voice phone calls sent to google voice? hangouts? Which one? I will receive the messages in my gmail whenever I have access to wifi? What about voicimail messages?

It's a lot to get your head around.
Google Voice uses an independent route (not relying on your carrier plan, except for cellular data access if not on WiFi) to send sms/mms. You can set it up to forward (duplicate) to your normal carrier messaging app if you desire, and/or to email. (But the message forwarding to your normal carrier messaging app won't work for you right now for mms.....). You can read messages in either app on your phone.

Calling is different-- unless you're using hangouts all phone calls actually go through your carrier plan and allotments, and won't work on WiFi. People 'see' your Google Voice number, but the real call is handled by your plan carrier. Hangouts adds the option of WiFi calling or calling over cellular data.

Voicemail can get weird. You can set up GV to transcribe and send voicemail to your email. If you're using Google Voice as your main incoming number for voice, it can be difficult or impossible to completely control whether voicemail will be handled by GV or your carrier voicemail.

Are you using Google Voice now? If so, how? (are you using your google voice number as the number you give out?). If you're not using your GV # as your 'main' phone number to distribute, folks would need to remember that you have different phone numbers for receiving calls, and receiving messages.

(Your Google Voice # and hangouts # would be the same-- that's only a matter of how you deal with it on your devices. Hangouts adds the option of calling over data-- either cellular or WiFi, without using carrier allotments. I don't use Hangouts, because it adds an additional set of complications to how messaging works......)

OK let me rephrase the question. I am in an area of Verizon only provider. How do I get service that accepts talk and text including mms picture and group messaging for the lowest possible cost. This is becoming critical for post storm communications.

Does your current tracfone run on the Verizon network, as I think you may have mentioned. Not sure, but if you linked your tracfone # to your GV#, you would have option to have all calls, messages, and voicemails go to your GV# and gmail using your tracfone data or wifi. As Kent said you can use both GV app or Hangouts, connect them or not, and you can set the GV app to use the native dialer and show your GV# on all outgoing calls, etc. If your tracfone is not on the Verizon network, you can get the tracfone sim kit that has CDMA Version sim for compatible phones, or you can buy a tracfone already set up on Verizon. That said, if you do have a GV#, it's easy to just download, if you can with wifi, the GV app and/or Hangouts from the play store, set it up, and give it a try.

als, what part of the country are you in? Carolinas? (Be as specific as you're comfortable with, and maybe we can do some poking around for local reports for you.) (I've read that Verizon towers are down all around the Florida panhandle, for example-- so no verizon network phone is likely to have reliable data connections regardless of provider......I suspect that the blocked data issue may be Verizon-specific, or perhaps all-Verizon-MVNO-specific, and not just Tracfone-specific)

Is your current Tracfone on Verizon? (I don't remember, either.) If so, do you have intermittent access to WiFi?
If yes to both of those, I think Google Voice is worth a shot. Share the GV # with work and friends, and ask them to change your phone # in their contact list to that #. (Maybe try with one good friend first, as a test).
If your current phone has semi-reliable voice/sms, set up GV to forward voice, text/mms to your carrier #. You'll get these as soon as they come in. If you have a cellular connection, but no data, you'll be able to send sms via your carrier #, but won't be able to send via the GV # without a data connection. When you get around WiFi & connect to it, GV should download any waiting mms into the GV messaging app, where you can read it. (Even if forwarding to the carrier messaging app doesn't work for mms.) You'll have to check email manually when around WiFi.

Voicemail-- good question. If the above is workable, voicemail left on the VZW voicemail would be accessible anywhere you have cellular voice service. You can set up GV to transcribe voicemail and send it as a text to the GV app, but you would only see it when you can get a data connection, either from WiFi or cellular.

As it appears Tracfone is blocking data locally, the only way to confirm that another MVNO is not blocking data is from reports of local users........

If you already have a Google Voice #, you're part way there. If you don't, a new number is provided free. If you like the setup, you can later port your existing number into GV for $20-- but I wouldn't rush to do that. You'll need to find WiFi to download the GV app on your phone. You won't need Hangouts or hangouts dialer to try this. (The only reason I can see to go the Hangouts route is if you have regular and reliable WiFi access, but no cellular voice connectivity.)

@als I have been heartened to see you post in a couple of threads recently. Has your cellular connection improved, or has your location changed? I'd be most interested in hearing a followup to your predicament!

KentE Thanks for posting in the mms. topic I never saw your wonderful instructions on google voice from three weeks ago, till your new post on this topic just now. It may be the answer .
Currently I am without any cell service at all, so figuring out mms and making and receiving calls through google voice when I have wifi with your help will be greatly appreciated. I bought the.rebel tracfone package on the ebay tracfone wireless site. Buyer Beware . it does not have a standard power connection, and did not come with a charge/ connector in my package. I did not realize till after I setup and transferred to the new phone. So , no phone, till at least next week when i get to town or tracfone deigns to send me a charger, 911 will still work (if we need it) on my deactivated phone.. Our work phones are on verizon and incoming or outgoing calls are still extremely spotty. so it is more than a question of MVNO de-prioritization almost 2 months after the first storm
Thanks again .The important thing is we all made it through the storms. All the rest is just minor aggravation compared to those who lost loved ones. We have a lot to be thankful for
being alive and unharmed.

Thank you for providing an update on your well-being. I can't imagine the horror of back to back storms. I'm glad you're able to maintain a positive attitude, faced with so much adversity. I know recovery takes time, but I hope the pace to restore services increases. I realize the things we take for granted are more than minor inconveniences. Take care