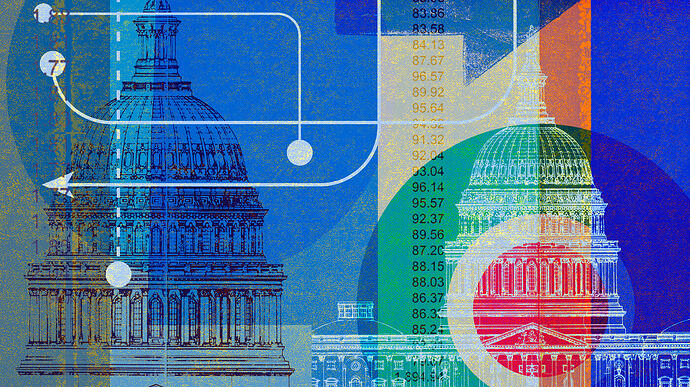 As Trump And Congress Flip-Flop On Health Care, Insurers Try To Plan Ahead

Insurance companies face deadlines to offer Affordable Care Act plans for next year, but lawmakers and the White House have left key decisions up in the air.

"At times it feels like you're building a boat, while at sea, in a storm, at night. But that's what we're here to do,"

***This healthcare CEO is struggling with the current flip-flopping on healthcare bills. It seems that he was correct in choosing a healthcare career rather than a boat building career.

Depending on one's perspective, the insurance companies are either a major cause of the nation's healthcare problems or the solution to these problems if only government would let that market work its magic. No amount of factual data is likely to change many minds on that topic.

There are some factual data that should cause the average citizen, regardless of political persuasion, to pause. While a nation's aspirations are embodied in the lofty rhetoric of its most treasured documents that describe its proclaimed values, its actual values are found in its rankings in international statistical comparisons.

The first relates to the fact that healthcare expenditures by government are extremely high in the US relative to other countries although access to healthcare is less generally available.

The second relates to the net wealth of the government. In the case of the US, the situation is rather disconcerting and this somber picture does not include the unfunded liabilities which would make the picture far more grave.

Perhaps the most telling, however, is the measure of child well-being which is a statement of how the nation, in relative terms, serves the needs of its most vulnerable members.

Thanks again for the treasure trove of information. These findings ought to be required reading for all US citizens prior to the yearly state of the union speech.

Although the people who produced these important findings have warned about careless interpretation of the comparisons, just about any interpretation of the data must conclude that the USA is average or below in, at least, the Childhood categories that are of utmost importance to a country's well being and future. In short, the US is in dire straits.

What I find interesting is that data such as this has been around in one form or another for many years, and yet it has rarely been discussed or acknowledged in American social or political discourse. I can remember reading 30+ years ago how the top,straight A students in the US would be just average students in many other developed countries, a fact that still holds true. The fact that we have a problem disclosing and discussing our shortcomings does not bode well for the future. It is ironic that every election people talk about fixing education, healthcare, our broken economy, and many other things, and yet they are not only not fixed, but become worse in many cases. Obviously, it is doubtful that President Trump had any of the above stats in mind when he vowed to make America great again, but if he did, he has an extremely huge and tough row to hoe. But let's give him some credit for the "inherited a mess" statement. Have we become an ostrich republic?

*** A personal side note about the "Headstart" government funded early childhood education program in the US: When my wife retired from her normal job, she decided to work for Headstart, not for the mere pittance that they pay, but because she liked young kids and thought she might actually do a little good. One thing she discovered was that because the employees, at least at that time, were barely paid above minimum wage, Headstart had hired many people who were not, so to say, the best money could buy. This is not to say that there were not dedicated employees who were quite capable, but it is to say that many employees, who had been relieved of their duties at other educational venues, were willing to work there because they could and for little pay. Many of the "better' employees would use Headstart as a springboard to a better working environment with better pay, which is understandable given that their pay at Headstart would almost qualify them to enroll their own children in Headstart, assuming that was their only income.So, in this case, we obviously need to devote more money to early childhood education, not to mention teacher's pay at all levels of education. Children do deserve the best.

On a personal note, I have always felt that the State of the Union is an unfortunate term since it focuses attention on the origins of the nation rather than on the more relevant question of the State of the Nation relative to other nations at the same stage of development.

As you say, there are complexities in the compilation of the data but it is extremely improbable that relative rankings are far from the truth.

The data on government net worth are, by any standards, a flashing red light.

It is certainly the case the current situation reflects the net effect of our collective decisions over the past 50 or more years.

There is no doubt that over some reasonable time frame (15-20 years) the nation could dramatically change its relative standing in these and other key metrics if this became a national priority. That would require a different approach on the part of the electorate which in turn would trigger different behaviors by elected officials.

We are free to choose our future path but if we want a different outcome in the years ahead we need to stop doing the same thing over and over again.