I'm pretty surprised that H20 wireless hasn't been mentioned as a possible prepaid MVNO here. So I created a thread for them. They are an AT&T MVNO. One of my lines were with them before I finally completely moved all my lines to RP in 2016.

They completely revamped their plans by offering more data a few months ago. (Although at a second glance these might only be promotional offers.)

Their two lowest cost offerings are

They have two other plans also listed here... 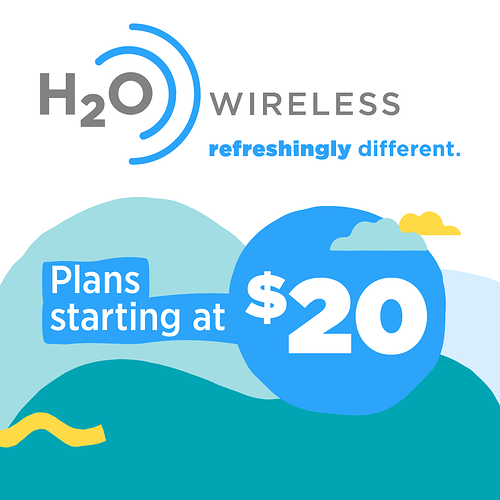 If you have more than one line they also offer a $10 discount for each additional line as long as you chose a prepaid line with a $40 plan or above.

I am currently not on any plan so I have no referral codes to give you but if I do join H20 and depending on the rules of this forum I might post a referral code in the future.

Also, FYI: The parent company of H20 is KDDI which is the second largest telecommunication company in Japan. So the company itself does have some pedigree backing it.

I hope to keep in touch with you on these forums and compare and contrast and get into silly disagreements with y'all over which MVNO is the best option.

Why is H2O better than CRICKET?

Also, the pricing you quote above will change after March 31.

Why is H2O better than CRICKET?

Also, the pricing you quote above will change after March 31.

Also as pointed out in the article linked above new customers may be able to get 50% off and a free sim.

New H2O customers can get a free SIM, free shipping and 50% their first month of service by entering code 50off at checkout.

I've used H2O in the past as PAYG and was very happy with it. Only reason I don't use them now is I moved to a dual sim phone and AT&T no longer has 2G frequency bands.

1.Their lowest costing plans are both the same. Cricket does make more sense for those who are bringing more than 1 line imo if you are willing to deal with throttled 4G LTE speeds. If you have 4 or more lines Cricket might just be one of the best options on the market.

I've used H2O in the past as PAYG and was very happy with it. Only reason I don't use them now is I moved to a dual sim phone and AT&T no longer has 2G frequency bands.

Interesting I'm guessing they are running the throttled speeds on the 3G bands.

Sorry, I meant that I used H2O for text and talk only. On a dual sim dual standby phone, you can only assign one sim for data. So H2O would have to go in a sim slot for 2G only. H2O (AT&T) no longer has the 2G frequency band so it would not connect to the towers even for talk/text.

Can't you use a Dual SIM phone that supports two 3g/4g SIM cards?