The only thing I ask is to stay away from politics for obvious reasons.

Thank you for keeping this thread non-political. (Unfortunately, regardless of one's political views, that eliminates nearly 95% of the material worth posting!

I think the funniest / most ridiculous thing I've seen lately is a one-mile stretch of a main thoroughfare near where I live. There are "NO STOPPING ANY TIME" signs prominently displayed every 25 yards or so, but the road is always gridlocked during rush hour. I suppose our city's police force could make a fortune if they ticketed the thousands of scofflaws who disobey those signs every day.

Speaking of road signs, I always find funny the ones that say "Keep your eyes on the road". From early drivers ed, I remember instructors always saying to obey road signs. But in this case wouldn't I disobey the sign by reading the sign?

When I log into my sprint account I often get the error message "sorry, we've hit a speed bump" ... yes we all know you speeds are slow sprint.

I was at the airport in Manila, years ago, in a line that was several hours long. Prominently displayed was a sign that said, "We've computerized our operation. Please excuse the long delays."

I was at the airport in Manila, years ago, in a line that was several hours long. Prominently displayed was a sign that said, "We've computerized our operation. Please excuse the long delays."

Makes sense when you have a slow network.

They've since changed their policy, but when I moved from Pennsylvania to Georgia, many years ago, I tried to make a purchase with a check, at Sears.

They informed me that they didn't accept out-of-state checks.

I asked if I could use my Sears credit card and they said, "Of course!"

"And when I get the bill, at the end of the month, can I pay it with this exact same check?"

"So Sears won't take my check, today, but they'll take it at the end of the month?"

Do you remember smoking sections on airplanes?

I remember flights on JAL where the smoke didn't realize that it was supposed to stay out of my section of the plane. 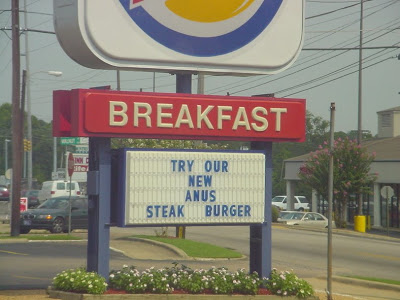 Deliberate and not so deliberate spelling errors:

Deliberate and not so deliberate spelling errors:

Those guys are definitely going to be the butt of a few jokes!

Chelle, I could see sears doing that

The following isn't so funny, but it surely was asinine. In about 2008, I was attempting to do a trustee to trustee transfer of funds from one bank to another, when I was notified by Wells Fargo, from where the funds were exiting, that they could not do it because there were two different types of accounts involved, which was not the case. So I go to the local WF bank with 30 or so bank statements to clear up the problem. The local people say I must talk on the phone with the main office, and so I explain to the main office that I have many statements in front of me that state specifically what type of account it is, and ask if they can bring up the same documents on their pc, which they say they cannot, but they know what type of account it is. To make a long, absurd story short, the main office tells me I don't know what I'm talking about and that I"m behaving like an ass. I replied that since I had 30 documents in front of me in clear sight of several WF employees, and they the main office had no documents save for some one snippet of info, they were the crazy asses. I sensed a certain admiration from the employees around me when I said that. WF, without an apology, eventually saw the errors of their ways, thus ending the asinine situation. Geez-- it's still not funny. 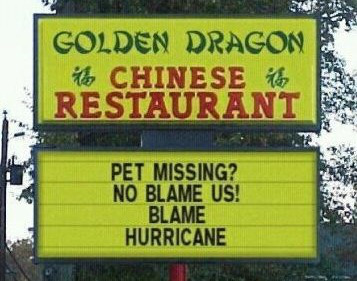 I think this sign is funny and also addresses asinine stereotypes.

Not sure how that fits here, seems like a personal belief

Not sure how that fits here, seems like a personal belief

I can't speak for Logan, but my guess would be that he thinks that this particular saying fits the thread's description. (Maybe / hopefully he can reply to let us know?)

Someone I know who served told me today there is an acronym for Things Falling Off Aircrafts called TFOA. My first thought was , except for the obvious things like bombs, wouldnt it make more sense to STOP things falling off aircrafts then creating an acronym for it? Just food for thought to add to the pile.

Someone I know who served told me today there is an acronym for Things Falling Off Aircrafts called TFOA. My first thought was , except for the obvious things like bombs, wouldnt it make more sense to STOP things falling off aircrafts then creating an acronym for it? Just food for thought to add to the pile.

I suspect acronyms, especially military ones, best be understood in the context from which they were born, which , in the case of military ones, probably originated during the chaos of war where order often seems impossible. "Snafu", for example, likely originated during WWII during the ravages of disorder that so often occur in combat. Yet these acronyms grow and are used during relatively orderly peacetime activities as well. 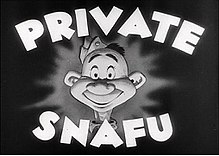 SNAFU is an acronym that is widely used to stand for the sarcastic expression Situation Normal: All Fucked Up. It is a well-known example of military acronym slang. It is sometimes bowdlerized to "all fouled up" or similar. It means that the situation is bad, but that this is a normal state of affairs. The acronym is believed to have originated in the United States Marine Corps during World War II. In modern usage, SNAFU is sometimes used as an interjection. SNAFU also sometimes refers to a bad ... 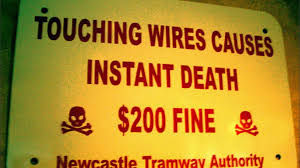 I find some signs funny:

Why did Karl Marx always write in lower case letters.---Answer in attachment below. I also thought this protest sign was funny. 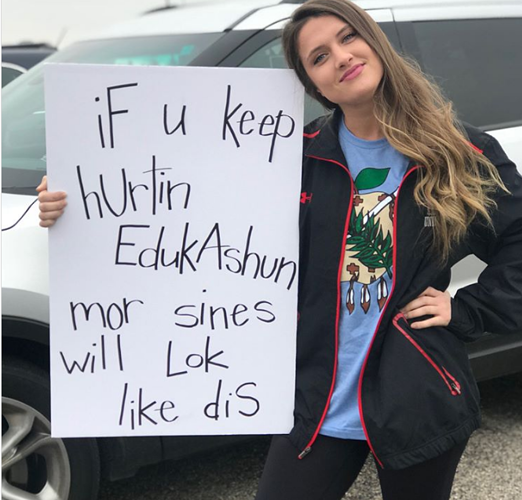