22 Year Old Blast from the Past

Here's a fossil one can play with---Windows 95. You can run it as an app on desktop Linux, Windows 10, and MacOS. And you don't need a license to do so, yet. 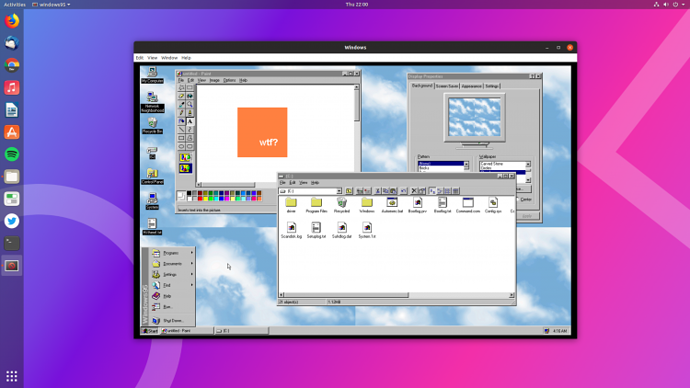 Run Windows 95 on Your Desktop as a Standalone App - OMG! Ubuntu!

Fancy running Windows 95 on your Ubuntu, macOS or Windows 10 desktop? Of course you don't, but for some bizarre reason you now can. A developer by the

When you get windows 3.1 let me know

When you get windows 3.1 let me know 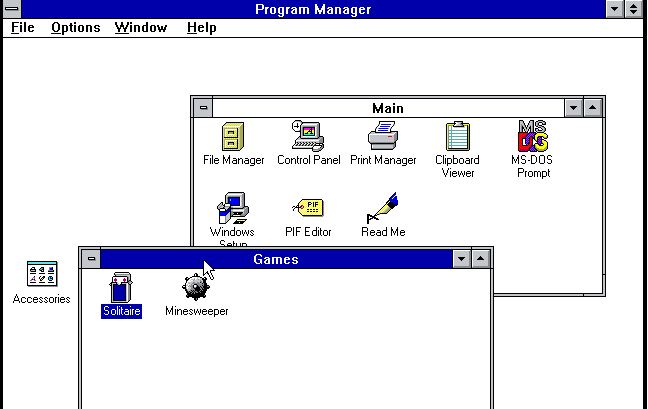 http://www.windows93.net. **** Looks as if these will only run on a desktop PC, not phones or tablets.

Win 95 was the first Microsoft os to play videos.one of the music video was weezer (buddy Holly) 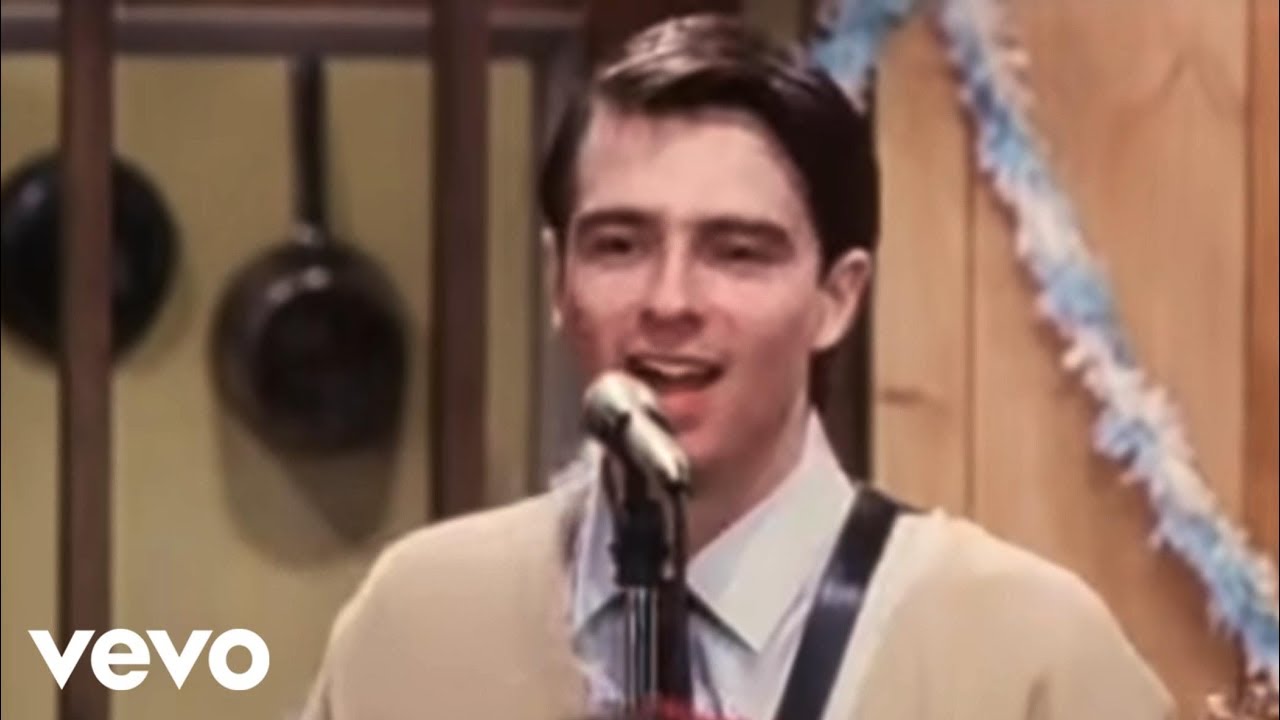 A few years ago, perhaps during the transition to Windows 8......
I went to a surplus equipment sale at the local branch of a major casino company.

They had piles of dirt cheap Windows XP machines, and I bought a couple. I was intrigued when I noticed that the piles included a number of mid-XP era PC's with Win95 licenses . Of course, I had to ask the IT Department guy on duty what that was about. Apparently, some critical piece of software used in their accounting department had not been updated since Win95 days, so they special-ordered PCs for it. I thought about buying one just to see how a Win95 installation would work on relatively current hardware. (I think they were $5, but missing hard drives of course.)

Win 95 similar to the others. Not as fancy and a little different

I didn't start using a pc until about 2010, and the first OS I used was either Windows XP or Vista. Funny, some 42 years prior to 2010, the US Army sent me to school to learn how to read the codes of pre-punched data cards, for the Army was in the process of instituting the first intranet, and although only a few people used computers, data cards were essential in linking the system together. So the gap between my first contact with pcs and the actual use of them was large. A few years back, when Microsoft had fully transitioned to Windows 7 and was updating to Windows 10, I remember reading about how the US Navy still had all their systems running on Windows XP, I believe, and because all was working well, and because the cost and time to update to W10 was enormous, they were paying Microsoft a lot of money to maintain and keep the Vista OS running smoothly and securely. 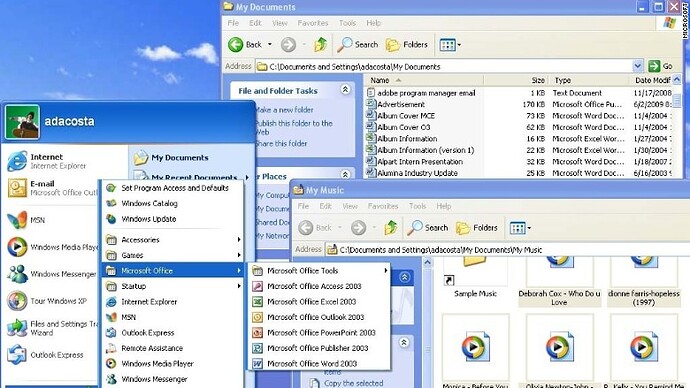 The Navy is paying Microsoft millions to keep upgrading its Windows XP computers.

I have a Win 3.1 notebook, but I haven't played with it much.
I bought it to run controller software for an obsolete-but-still-in-use hardware unit. The software seemed to run fine on Win95/98, though.

It would be something if @KentE discovered an old Apple 1 in his basement.

It's amazing that when Apple first launched its first computer, the Apple 1, half of the company was devoted to customer support or service.

"It turned out that Wozniak was the only person who could answer customer support questions." 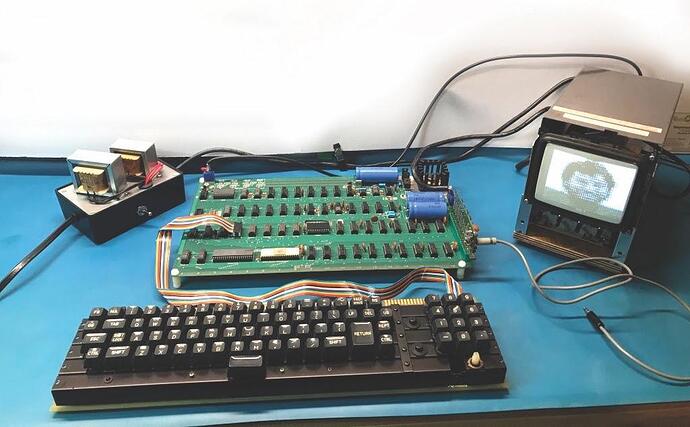 APPLE’S first computer has gone up for auction – and could fetch as much as £470,000. The extremely rare Apple 1 model was hand-built by company co-founder Steve Wozniak, and opens up for bid… 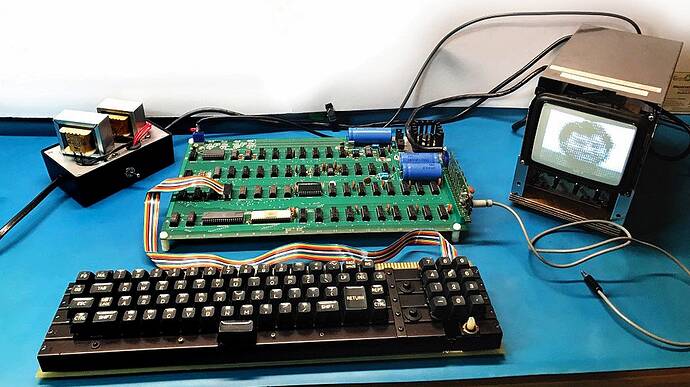 Functioning Apple computer built in 1970s up for sale

A piece of computer history that helped launch a trillion-dollar company is hitting the auction block.

Isamorph writes:
"It would be something if @KentE discovered an old Apple 1 in his basement."

No such luck. I've avoided Apple products, other than one round of updating my wife's ancient iBook...... with the help of the Genius Bar, but without personal assistance from Steve Wozniak.

How much is a commodore 128k worth?

Not 64k as you are all thinking. But 128k the more expensive one. Though not as popular